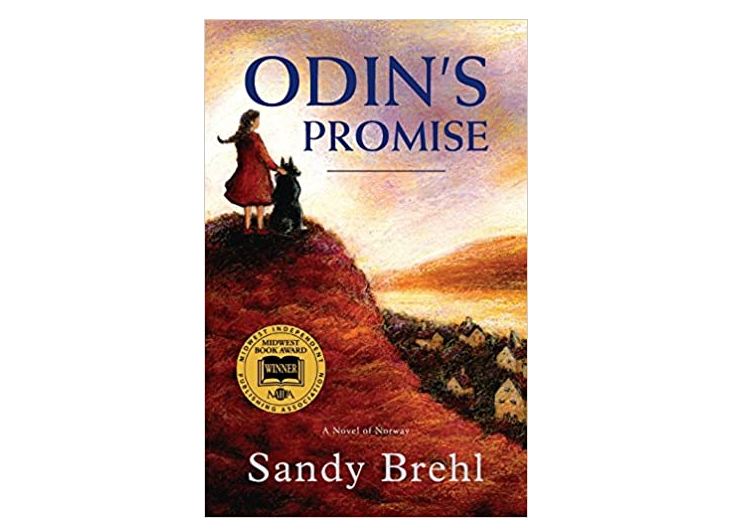 Fictional stories provide an effective way of communicating your thoughts to young minds without making the narrative seem like a boring life lesson. Since most fiction books require children to do some reading, the following list is recommended for intermediate readers, especially those who aren’t easily persuaded to pick up a book.

Little Bean is reluctant to befriend her new neighbor Ivy because she seems to act too straight-laced. However, when Bean realizes that Ivy is more than willing to help her conspire against Bean’s older sister, Nancy, she is pleasantly surprised. The two explore their friendship in an imaginative world in Ivy’s house by deciding a spell to cast on Nancy.

Ivy and Bean is an entertaining read involving a lot of fun-packed moments. Its central theme is about being cautious of getting the wrong first impressions. Author Annie Barrows teaches kids to enjoy their friendships to the fullest. We recommend the book for children aged 6-8.

Odin’s Promise is set in 1940’s Norway during Germany’s invasion through World War II. The story begins with 11-year-old Marl and her Norwegian elkhound Odin coming across German soldiers who are “escorting” Marl’s badly injured Jewish neighbor out of the village.

In a manner similar to Lois Lowry’s Number the Stars, author Sandy Brehl introduces middle-grade reader to the oppressed, fearful Norwegian culture created by the German occupation. Secretly, however, the proud Norwegian people are tirelessly supporting each other to be able survive this difficult time in our collective history.

11-year-old Agathea (Thea) is put on a ship to spend her summer vacation on her grandfather Titus’ farm. Thea soon becomes aware of Titus’ deep secret that he has been in contact with an alien planet since childhood. The two are now the keepers of the firestone crystal – a magical gem that is the key to the salvation of the whole universe.

The Firestone Crystal is the perfect book for kids interested in a bold, adventurous, and fantasy journey. Author Linda M. David has created a creative universe brimming with strange and advanced alien life. Besides a suspenseful plot, the story has several important lessons relevant to tweens and teens who love science fiction.

4. The Bewitching of Alison Allbright

Alison is a lonely adolescent girl who constantly feels shunned by her peers at school. Her life changes drastically after she meets the rich and well-respected Mrs. Considine. She finds herself slowly captivated by Mrs. Considine’s apparent charms and fabulous lifestyle, but what will happen when she finally uncovers the latter’s terrible dark secret?

The Bewitching of Alison Allbrightexpertly builds up thrill and intrigue without having to rely on elements of supernatural or fantasy. Author Alan Davidson sets up an intricate plot with excellent character development and intense climax. We would recommend this book for children above 9 years of age.

5. Judy Moody Was in a Mood

Judy Moody Was in a Mood introduces us to Judy as she has to do a “Me Collage” as a special Grade 3 project. We find out that Judy wishes to be a doctor in the future and already has a Band-Aid collection and a pet Venus fly-trap. Even though she is often in a bad mood, she is loyal and compassionate towards the key people in her life.

The book is the first in Megan McDonald’s Judy Moody series. The clever illustrations by Peter Reynolds add to the charming flavor of the book and provide a smooth transition to chapter books for beginning readers. Judy’s non-typical diverse character makes this book enjoyable for both girls and boys above 8.

Jaycee, the geeky 13-year-old, is magically transported to her favorite video game – Hero’s Sword. She finds herself facing all the familiar characters from the game but with a sword and a bow and arrow in hand. As she progresses into the game, she discovers her new natural talent and is destined to become the hero of the video game.

Power Play: Hero’s Sword is a modern and creative take on children’s book. It is fast-paced, action-packed, and filled with multiple exciting and imaginative themes. Author M.E. Sutton has a light and engaging writing style that makes this relatively short book a must-read for children aged 6 or older who love tech.

The Smurf’s Anthology contains six “Smurfy” stories filled with a mystical creatures living in a fantasy world and having diverse personalities, each of which is a symbol of a particular moral strength. The optimistic Smurfs characteristically remain in an unending battle with the evil Gargamel and his cat Azreal.

The book is adorned with fantastic and simple illustrations. The story involves lengthy tales depicting humorous moments, touching moments, tense moments and, at times, ironic moments. The Smurf’s Anthology is a nostalgic treasure for adults and a memorable experience for kids obsessed with fantasy.

In a futuristic society where gardening is prohibited by the law, people receive nutrients and vitamins from tablets and have been fully disconnected from the natural origins of food. 12-year-old Claire and 7-year-old Dante, the sibling duo, are part of a secret underground movement, the Seed Savers, who put their lives on risk to collect and protect seeds and keep the knowledge of gardening alive.

Seed Savers: Treasure is a brilliant story set in a dystopian world, clarifying that even in the absence of war and violence, there are much more subtle and frightening problems people may face – like not being able to grow your own food. Author S. Smith puts forth several valuable lessons regarding social nature in a thought-provoking story that is appropriate for kids aged 9 or above.

Church Camp Chaos features the story of Emma Jean Payne (EJ Payne), a highly imaginative 11-year-old whose diary entries make up different moments in her life. Each chapter focuses on a particular event such as EJ’s first day of summer camp or her birthday party.

Author Annie Tipton has put together an incredibly delightful and funny series of tales that take us into the mind of a lively tween girl. The book is second in the Diary of a Real Payne series. It is suitable for girls between the ages of 8 and 12.

Bilbo Baggins is your average hobbit who isn’t interested in any adventures. His life changes dramatically when, one day, a wise old wizard, Gandalf the Grey, chooses Bilbo to accompany him a majestic quest. The dwarves have been thrown out of their kingdoms by the evil dragon Smaug and they need the help of a burglar to regain their rightful place under the mountains.

The Hobbit is a classic tale by J.R.R. Tolkien that brilliantly showcases courage, teamwork, and the thrill of adventure. It has everything that makes a book interesting and that excites the imagination of a child. The book is an excellent recommendation for any kid aged 8 or above that has shown love for fantasy.

Based on a true story, A Place to Call Home follows Toby the white German Shepherd who is born on a breeder’s farm. Toby’s fur is considered unusual and undesirable by his breeders. His life is filled with emotional ups and downs as he is separated from his mother and sister and has to journey across the United States to search for his forever home.

Author G.A. Whitmore tells a moving tale in a style reminiscent of Anna Sewell’s Black Beauty. The book features several perspectives of different individuals and animals to present a poignant, drama-filled narrative that will effectively make you smile, shed tears, and want to immediately adopt a rescued dog from your local shelter. The book will be enjoyed by all animal lovers aged 10 or above.

Karmackis an original and brilliant story told from the perspective of a bully. It follows Sully and his friends who regularly bully their fellow fifth-graders. From intimidation and pranks to physical violence, there are many forms of bullying. The book also goes into detail as to what counts as bullying and why it is wrong. The consequences of your actions matter, regardless of your intentions.

By the end of the story, the mean-spirited bully will be transformed into a strong leader. Author J.C. Whyte uses efficient writing techniques so children can learn this fundamental life lesson. While not everyone accepts the concept of “karma,” the story makes appropriate use of it to tackle the sensitive subject of bullying. The book is recommended for kids of ages 8 and above.

The 1967 Detroit riot and its aftermath providethe background for Between the Lines as three young girls form an unlikely companionship. After her 10th birthday, Hattie moves to a new neighborhood where she meets Beverly, a young black girl, and the tomboy Ann “Crackers.”

In a time when racial discrimination and oppression is spread by their own friends and relatives, the trio is determined to show the world that “friendship is colorblind.” Claudia Whitsitt does a beautiful job at describing the thoughts and feelings of an innocent girl while also sharing historical facts regarding the root causes of social discrimination. The book is suitable for all kids of ages 8 and above.

Off We Go for 80 Days takes us along 6-year-old Jimin and his 9-year-old sister Rina as they travel to 10 countries across the globe. They witness famous sites such as the Eiffel Tower in France, the Black Forest in Germany, the Leaning Tower of Pisa in Italy, and the Red Cross Museum in Switzerland for the first times.

Jimin and Rina Jung also participate in many cultural traditions such as joining a soccer camp in Geneva, taking a gondola ride through the canals of Venice, eating Dim Sum in Hong Kong, and camel riding in the deserts of Dubai. Impressively, the authors of this adorable collection are the Jung siblings themselves.

The Red Sash is an interesting and an accurate portrayal of a fur trading post in the early 1800s, revolving around a young Native American boy. The story is an adventure and takes place at the time of winter on Lake Superior. The trading season is in its full swing, and at nighttime around the campfire, there is dancing, feasting, as well as trading.

Author Jean E. Pendziwol’s excellent writing style and Nicholas Debon’s detailed illustrations make this a wonderful picture book. The book is an excellent resource of education regarding the history of fur trade in Canada and is recommended for children of ages 6 and above.

These are our picks of some of the most well-done fictional works for children. When it comes to fiction, there are potentially tens of thousands of books out there. So, it’s quite important that children are introduced to multiple genres and different writers so they can recognize which setting suits them the best.