Harry Potter is set in Britain in the 1990s. It is an alternate-Earth setting, meaning the world, its history, and its people and culture are all identical to Earth’s, but with a few twists. In this instance, magic, wizards, and monsters have existed alongside humanity for all of time. But, instead of a society inundated with magic, it is exactly like our own.

The magical society around the world endeavors to keep themselves secret from regular human, or ‘Muggles,’ as British witches and wizards call them. Their reasoning behind this is that they do not want the world to come to rely on them for a magical solution to every problem they have. The group in charge of keeping magic a secret from the muggle world is a section of the wizards’ government. In Harry Potter, the most interacted with the body of government is the British Ministry of Magic. They utilize magic to wipe the minds of muggles who have supernatural experiences and keep magic from the media and newspapers using different spells and charms.

Young witches and wizards are born with their magic but do not know how to control it. Exceptionally powerful witches and wizards can cause themselves harm when using magic without proper education. Thus, they are sent to schools of magic where they learn several mundane subjects like math and learn how to harness and control their abilities properly. Young witches and wizards are taught magical disciplines like potions, transfiguration, and charms, among others. The school most prevalently shown in the books is Hogwarts, the school that Harry Potter, the main character, attends.

Magic in Harry Potter takes the form of spells. Witches and Wizards learn to control their magic in such a way that they can produce different effects over and over again in the same, precise manner. All young witches and wizards receive a wand before they begin their magical education. A wand serves as a focus for the wizard, which helps them guide and control their magic much better than they can do on their own.

With a wand, a wizard learns spoken spells. Spells words of modified Latin that are designed to produce a magical effect. While the words of a spell are not inherently necessary, they serve as another focus and guide to the magic within the caster. The drawback of using spoken spells is, if a wizard is in combat, a spoken spell will give away their intentions and what spell they are about to use. A technique taught late in a witch’s education is silent casting. The technique is exactly as it sounds. A wizard focuses on the incantation in their head rather than speaking it. Enough practice renders this to be a potent technique. Alongside spoken incantations, a wand must be gestured properly when casting a spell. Without the correct movements, the spell will fizzle and fail.

Magic can be used without a wand or spoken spell. Often, untrained wizards will produce a variety of effects in the world around them using magic. Most of these are nebulous and hard to control. Once a wizard becomes trained in the magical arts, they rely on their wand and spells to use magic in any controlled, safe way.

With all things, there are exceptions. Some wizards and witches are so powerful or talented that they can purposefully direct their magic without a wand. They direct their magic just like others would, casting spells and producing effects, only without the need for a focus like most wizards do.

The main character of the series, Harry’s parents were killed when he was a child. He grew up in the muggle world, unaware of the existence of magic. He lived with his mother’s sister, Petunia Dursely, and her family. Petunia was a Muggle but knew of her sister’s nature. She was quite jealous of her. Her husband and son knew a little bit about the magical world and hated it. Due to this, Harry grew up abused and neglected. At age 11, Harry receives word that he is a wizard and that he is to attend Hogwart’s School of Witchcraft and Wizardry to learn to control his powers.

Harry is a courageous, selfless person, almost to a fault. He can be rash and reckless at times in his pursuit to help those he loves. He will not hesitate to risk his own life for those he calls friends, something taken advantage of a couple of times throughout the series. Rowling describes Harry as someone who ultimately tries to do good despite his flaws and failings.

Hermione is a muggle-born witch of surpassing ability. She is the same age as Harry and is one of his closest friends. She meets Harry and Ron on the train to Hogwarts, when they are all about to embark on their first year of education. Hermione rapidly proves herself to be a brilliant witch, acing all of her subjects and climbing to the top of every academic record she can.

Hermione is exceptionally intellectually minded. She does not hesitate to share her knowledge on a subject and is eager to prove her worth in the classroom and to her friends. She does this not from a desire to be viewed as smart, but instead because she genuinely loves magic and learning. Despite this, when she meets new people, they often see her as a know-it-all, even though that is not her intention. Hermione is very logically minded, using reason and thinking to solve her way through problems, rather than brute-forcing them with raw magic as many wizards do.

Ronald Weasely, a close friend to Harry and eventually Hermione’s love interest, is the sixth of seventh children. He met Harry and Hermione on the train to Hogwarts. He quickly became fast friends with the two and wholly supported Harry in every endeavor he undertook. Ron always felt the drive to prove himself. His older siblings were distinguished wizards for one reason or another, and he did not want to live in their shadow.

Ron is very brave and loyal, befitting a Gryffindor. He also has quite a sense of humor, like his older brothers Fred and George. Ron struggles with image, desperate to prove himself. Much of this is directed towards his brothers, whom he feels he must live up to. But, some of this drive spills over to Harry, an incredibly famous, talented wizard in the making.

Albus Percival Wulfric Brian Dumbledore is considered the most powerful wizard in the world, bar one. Dumbledore is an ancient wizard, having lived through many calamities in his time. He is the current headmaster of Hogwarts and is one of the only deterrents to Voldemort. He is a confidant to Harry and is the head of the Order of the Phoenix.

Dumbledore is benevolent and wise. Often soft-spoken, Dumbledore gives off an aura of calm and composure, rarely showing anger or other strong emotions. He spoke respectfully to all, even those he finds distasteful. Despite his mild nature, he is the only wizard that Voldemort fears. Dumbledore’s power and ability allow him to use powerful magic, even without a wand.

Lord Voldemort, also known as Tom Marvolo Riddle, is the leader of the Death Eaters, whose only goal is the subjection of the world. Voldemort is obsessed with the purity of a wizard’s blood and hates muggles. Voldemort, in his early years, attended Hogwarts and was even taught by Dumbledore. Voldemort is immortal so long as his Horcruxes are not destroyed. His name is so feared that people refer to him as ‘He Who Must Not Be Named.’

Voldemort is power-obsessed and a megalomaniac. He only cares about his power and his agenda. He is incapable of feeling remorse or pity or love. He does not care even for his most loyal followers, viewing them as pawns in his game at best. He is considered to be the most evil wizard in hundreds of years. 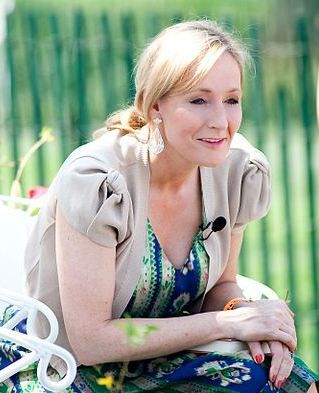 J.K. Rowling was born on July 31, 1965, in Yate, England. After studying and graduating at the University of Exeter, Rowling moved to Portugal to teach English, where she married a journalist named Jorge Arantes. Together they had a daughter, Jessica, in 1993. Arantes and Rowling eventually divorced, and Rowling moved back to England.

There, she struggled financially, and during this harsh time in her life, she wrote the first book in the Harry Potter series. It was rejected several times until she eventually sold it for the equivalent of $4000. Over the next few years, Harry Potter changed her and her daughter’s lives. By the time Harry Potter and the Prisoner of Azkaban was released, the series had made over $400 million worldwide. By the time the seventh and final book came out, the books had broken multiple records and dashed Rowling’s financial troubles away.

Rowling’s work follows the life of Harry Potter and his attendance at Hogwarts School of Witchcraft and Wizardry. There he learns how to control his magical abilities and how to be a proper wizard. He learns subjects like alchemy, charms, transfiguration, and how to defend himself against evil magic.

Harry and his friends get up to many adventures in their years at Hogwarts. The overarching goal is the defeat of Lord Voldemort, an evil wizard attempting to kill Harry. Harry is fated to either kill Voldemort or die at his hands. Voldemort fears this and tries to kill Harry many times over the years.

Harry Potter was a smash hit around the world. The series sold in dozens of countries and was translated into many languages as well. Harry Potter and the Goblet of Fire became the fastest-selling book in 24 hours – ever. This record would be broken by subsequent books over and over, culminating with The Deathly Hallows. Harry Potter and the Deathly Hallows was also the most pre-ordered book of all time, easily breaking records.

Harry Potter also received eight movies for its seven books. They were extremely well-received and famous around the world. A big reason for their success is that they stuck closely to the source material. A big reason for Harry Potter’s literary success is the storyline and the beloved characters. The filmmakers managed to capture this love in the movies, giving a big-screen glimpse at the magical world Rowling crafted.